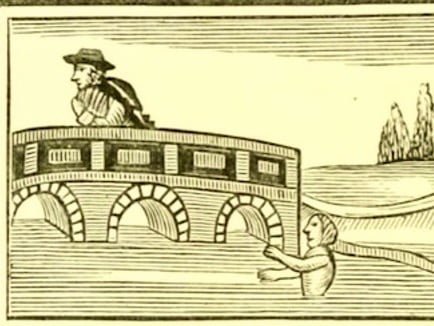 EVEN THE BEST RECORDS HAVE GAPS BETWEEN THE TRACKS

I tap my swizzle stick against the cocktail
napkin and watch the bartender quarter limes,

lemons, and oranges. I watch him work the knife.
The full garnish bowl, a wedge salad of color and scent.

A blue streak in his hair catches the light,
the color of a Bombay Sapphire bottle,

and I catch myself wishing you were here, tonight,
telling me about the first time you heard Bix

on vinyl, that cornet, and how he died
of drink. All that’s left in my glass is ice

melting. I think I might call you here from the bar,
but you’re many-months sober and trying to make it work.

Some pauses and silences last longer than others—
I think this as I move out into the night.

BOTTOM OF THE WATER

The riverside motel insists I pay
by card, but they let me use an assumed name:
Aleck Ford Miller—the birth name of Sonny Boy
Williamson (who once played his harmonica
so sharply on a juke-joint stage he spat blood
into a coffee can all night). Last month
I did business as Gunnar Ekelof at a Red Roof.

The river beneath my window slides to somewhere.

Tectonic plates slo-mo against each other,
right now, edging in the Mariana Trench.
I choose plastic at the market.
The kid at the register asks if I heard they found
a grocery bag on the sea’s deepest floor.
I picture it fall and fall forever through the water.

A man opens his trunk and drops two bags
of trash from the edge of the bridge. We watch
them fall until they dematerialize.
He doesn’t care that I’ve seen him, gives
me a little wave hello. The woman
he’s with giggles, rounds the back of the car—
their red kiss drowned by haze of exhaust and taillights.

All this, and I can’t help but think of you.

A lone light, lit at my motel, and it’s mine.
If I squint just so, I see myself staring down
from the room’s window above, at me, and the water
moves beneath the bridge holding me up.
And then I turn out the light, slide the blackout
drapes together, and I’m on the bridge
hoping to see me turn the light back on.

This man is off living my life without me.
Back in the room, he’s gone, but my bags remain.

I’m trying my best to say it plain:
I’ll be there just as soon as I can.

LIFE IN THE GUSH OF BOASTS

“America is waiting for a message of some sort or another.” —Brian Eno & David Byrne

The bus’s accordion door opens wide
and we stumble out into the actual world.
You wait as I take a shot of the gutted church—

burnt out, busted windows, half-open door—
and a handful of gravestones fading off beside it.
My caption: What people mean by down and out.

The first reply: This is a like a poem.
We make our way down the sidewalk to the café,
my hand in the hollow of your hand, A little buzz

with each incoming response—red digital hearts,
blue thumbs up, crying yellow faces.
At the corner table, I set the phone between us.

Later, behind the menu, I search for “crudo”
so I’ll appear to know it means “raw.” I check
the new mountain of likes and replies and smile

at them, and you. It’s good for a person to feel loved.
We walk back toward the stop, and pause by an empty lot
lit by the random, frenzied flashes of lightning

bugs. There must be ten thousand, you say, eyes wide.
Some slow song drifts through the air from a nearby shop’s
outdoor speakers. The lot becomes a post-dusk,

bioluminescent floor demanding
dance with its flash patterns and warnings. We embrace
and spin. You stop me, raise your phone, and aim.