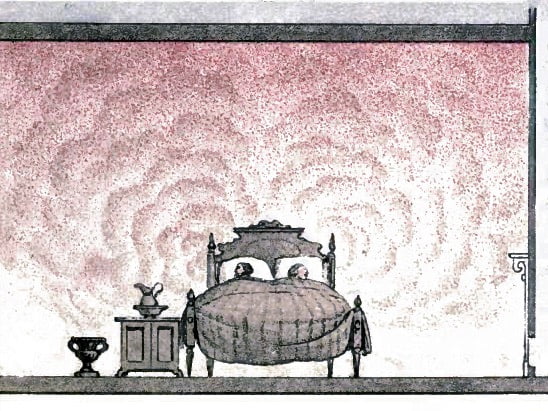 I pride myself on being a light traveler. If I can’t fit it in a bag on my back, I see what I can live without. I spent a few weeks traveling once with one long black wrinkled dress, a pair of shorts, some underwear, a couple of tank tops and a jeans shirt. I washed my underwear in sinks, and treated my black Tevas as dress shoes and hiking boots. When I had a baby, I returned the complicated diaper bag we were gifted and threw a baggy of wipes and a couple of diapers into a bag I sewed that fit over my shoulders like a hug. “Too many conveniences are inconvenient” became my mantra. I like to see how little I can get by with.

When Mom flew up to Maine to live with me, I packed her bags while she rested. My challenge was to pack enough so that Mom would believe that she’d live long enough to need clothes for warmer weather, but not so much that it seemed I didn’t believe she could go back home by the summer. She was flying from North Carolina to Maine. In January. I told myself that this was just one leg of a trip we were taking. It was a lie we agreed on. I needed it as much as her.

My best friend came to help me pack. We stood in Mom’s closet like we used to do in 9th grade before a football game and we might ask to borrow a sweater. We moved her clothes back and forth on their hangers, picking shirts she’d worn recently. Pants that didn’t seem too big. We laid the clothes out on her bed. I dumped in the whole drawer of socks. I packed her diamond bracelet still in its box.

Mom could take longer to pack for a vacation than the vacation itself would last. She’d get out a suitcase from the basement, staging the packing in a separate room. She’d try on every outfit and iron each piece, creasing as she folded items into an orderly pile. She’d pick out jewelry for each outfit. Shoes to match. She was always a good dresser. Even as her heart wore out and the muscle left her bones, she dressed well. An easy beauty. Gorgeous silver streaks through her jet black straight hair kept cut right below her chin. She always knew just the right thing to wear, and she wore it well. Packing for her two-week camping treks out in the Rockies with my stepdad must have taken months. This was when you could fly with cookstoves and camping knives, tents and butane. They would fly to Denver, rent a car, and open up their dog-eared and highlighted atlas. Supplies crammed into these old army duffle bags Mom had gotten from the old army surplus store in town.

It was wheelchair to wheelchair that day that started before light when her friends picked us up at rehab and drove us a couple of hours for a direct flight to Maine. I transferred the heavy bags to their car before I went in to help Mom. She’d managed to get herself dressed, and was putting on a little makeup. I pulled her tallest compression socks on her, and crammed her feet into her one pair of shoes.

Two days before she died, Mom woke up confused. She thought she was at her Aunt Margaret’s, where she had spent childhood summers. When we explained that she was in Maine, she calmly looked around like we were crazy.

“How did I get here?” she asked me. I sat down beside her on the hospital bed that was in our living room that had become her room.
“We flew up. Remember? We sat in First Class?”
“Did I sleep?” she asked.
“No. We talked and drank Bloody Marys.”

She looked around the room. I gave her time.
Maybe she noticed the walker or the bedside commode I’d just helped her off of.
“Was I in a wheelchair?”
“Yes”
Another long pause.

“Have I been sick?”
“Yeah, Mom. You have.”
“With what?” she asked, with some disbelief and confusion.

“Well, your heart has been weak.”
She nodded.
“And you remember about the polycythemia?”
She had been diagnosed with this disease 21 years ago, and had come to know it as well as any patient could.
“No.”
“It’s a blood disease,” I explained. “Your bone marrow…”
“Oh, yeah. Yeah. I know all about that.”

Another five minutes. Her room was off the front porch, which we had covered with bird feeders. Yellow finch, chickadee, wrens, and robins were busily taking turns. The lilac, grown to the height of the porch roof, was in full bloom. The light and the scent came in both windows, filling the room.

I fixed her some oatmeal, and she sipped her coffee. She seemed surprised that she was sore, as if she’d just entered this version of her body. After a few minutes, she said, “Well, I think I need to lay down,” as if she was surprised to need a rest after a day of shopping. As if she might hop up after a little nap and help plan what was for dinner.

She had two more moments of full awareness. One mustered for my son, when she told him good night. Another when my brother arrived from Illinois. She died two days later.

Two months later, my son returned from his first sleepaway camp. Getting him ready, we followed the packing list to the T. It was a lot of stuff, but I didn’t want to break the rules. When we picked him up after a week, he proudly told me that he didn’t change underwear all week, and changed socks only once. When I hugged him, holding back tears but trying to stay cool, I could smell the truth of this. Unpacking him later, we found most of his clothes still folded away. The letters we’d mailed to him unopened.

The day after he returned, we embarked upon a thorough clean out of the mudroom. As I lifted months of layers from one of the hangers—a beach bag, hoodies, a dog harness, a lanyard from a conference– I saw Mom’s pocketbook. It had hung there for the five months that she was in the other room, getting weaker and weaker. She only left the house twice after she arrived. Once on an ambulance stretcher, hugging my younger son to tell him she’d be just fine, and once when I took her to my favorite doctor.

Then one last trip, zipped into a bag, and loaded into a van from the funeral home.

I opened her pocketbook as I had all of my life.

How many times had my hands reached into her bags and come away with just what was needed? Grabbing a mint as she dropped me off at school, the keys as I ran out the door, Chapstick and tissues and Advil. Simply and silently, my needs met. For over forty years.

Breathing slowly, I reached in and removed each item, laying them out like evidence on the table before me.