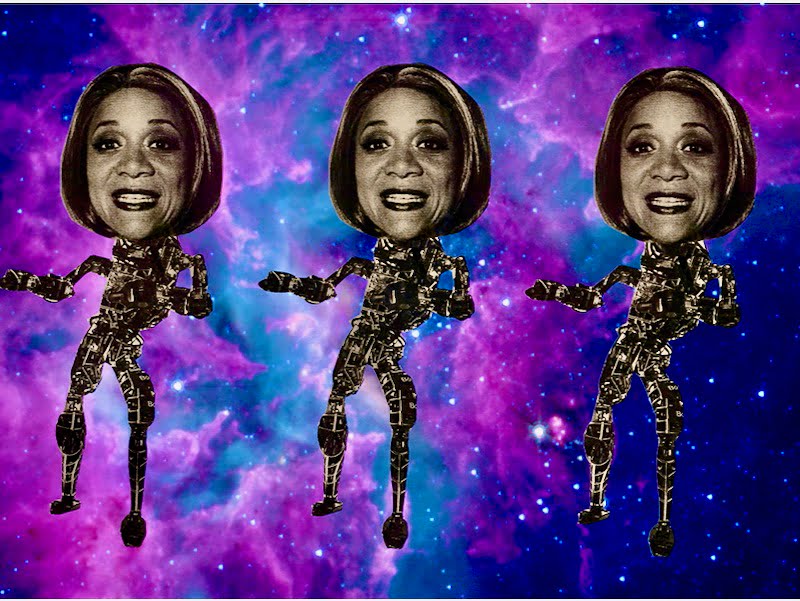 Barry begins to roll down the long hill, his body stiffening as he accelerates in the shaggy grass. Left behind is his wife, Martha, who hollers from the hilltop for him to stop. Worry lines crease her forehead. Her arms shoot above her curly blonde hair in panic. Like everyone else in the park, the couple, both in their mid-50s, had been on a routine evening stroll only moments before; Martha complained of ennui, and Barry griped about living in a rut. When Martha accused Barry of possessing a neutered sense of impulse, Barry said in response, his voice escalating, “You want impulse?”

That was enough to set the current scene.

The hill must run the length of a half football field, and for the first third of his descent, Barry’s figure takes on the form of a lowercase l. Now, in an attempt to end his example, he contorts his body to resemble an uppercase K, yet he continues at an uncontrollably dizzying pace down the slope. He exhales a series of grunts that signal displeasure. The knees and seat of his khaki pants stain green. Meanwhile, after a five second break in which her face contorted into a series of anguished expressions, Martha resumes yelling, “Stop!” from the top of the hill. She does not take a single step down the slanted ground. She does not move at all. And really, there is little one might do in an attempt to help the tumbling man, save for throwing one’s own body onto the ground as an obstacle, an impossibility since Barry is alone at this point, lost to gravity’s clutch.

Walkers stop at the bottom of the hill to take everything in: a late-middle-aged man awkwardly performing a child’s pastime, yet with no children in sight. None of the observers know Barry or Martha beyond saying hello while on these evening walks. They don’t know the couple’s names, let alone the fact that Barry and Martha have been married nineteen years, that Barry collects antique lighters, or that before she started wearing maxi skirts and sweaters daily, Martha once lived on a sailboat in her early twenties. The only truth the observers can glean from the duo is that of raw emotion: frustration, which has turned to fear. To some, a similar sensation runs through their bodies. For others, the chaos of watching Barry’s thinning brown hair spin brings to mind something from a Looney Tunes cartoon, a jumble of colors with swirling lines to emphasize speed and torque, paired with a ramshackle drum solo. Maybe a few explosion symbols and pastel text erupting from the ground: POW! OOF! But there is nothing vibrant or funny woven into this violent display. Barry bounces with a rhythm, but not the CRASH BA-BANG BANG BOOM from a cartoon. Instead, he makes a SWISH BANG SWISH BANG sound, his body a wet noodle arcing in the air, almost hovering for a flash before curling back down to the grass. Over and over. To be poetic, Barry is a river of catastrophe bounding before the eyes of his audience. An act meant for defiance conflated into an accidental disaster; the breath of pleasure commingling with a cloud of defeat. Divorced from its inherent brutality, the sight is hypnotic, like watching clothes loop inside a frontloaded dryer. Every spectator in the growing crowd is spellbound, and their eyes remain locked on Barry even as two events attempt to impede their entranced states. First, Barry loses his right shoe, a slate gray New Balance sneaker, which rockets from his foot, its white laces still tied in a bow. The low top flips three times in the unmown grass before finding purchase. Secondly, Barry strikes his head on a rock: a moist slap followed by a howl. A one in a million collision, since the hill is almost entirely grass. But the rock in question, lodged in the ground and no larger than a child’s clenched fist, rises about one inch into the worried air, and Barry’s path precisely marries his forehead with its exposed nub. Blood streaks across his brow. Droplets fling, similar to the lost shoe, and land ten, fifteen feet away on undisturbed patches of green, though the loss of blood fails to slow his progress, his SWISH BANG rhythm. The gore does not force his audience’s eyes from the scene, either. Much to their shame, the blood actually sharpens their attention. Because, admittedly, everyone in this park suffers from the same ennui that sparked Barry’s plunge. They may not know Barry or Martha, but they understand their plight, for they all trudge around after dinner. They all walk the same routes and keep their distance. Their lives are stunted by this crippling world, and watching a stranger tossed through the evening breeze at high velocity provides them with an unexpected diversion from their own stasis. The ferocity lights a fire in their bellies. Engages them, to the extent that as a group they sense a collective disappointment when they notice the hill’s base a mere twenty feet away from the toppling man. They want to watch their amateur gymnast forever, or at least until they are too tired to stay awake, so that the remainder of their day is devoted to ignoring their thoughts and anxieties for the future. But Barry cannot roll much longer, wishes cannot terraform a landscape, and after two more arcs toward the finish line, he finally lands hard on flat land. The rotations slow. His limbs splay. Barry stops on his back. At the hilltop, Martha stops shouting, too. She covers her mouth with both hands. If the sun hadn’t already crested the trees, one might see a tear slide down her pale cheek, while below, blood from his forehead rings Barry’s face and hairline, paints crimson the collar of his baby blue polo shirt.

Barry wipes the blood away and looks up the hill at his wife. She is so far away, so high above him.

In the fading light, the spectators rushing to his side resemble a Renaissance lamentation, with bodies posed in concern and curiosity. They murmur to each other through masked mouths. They gesticulate. One of the spectators, let’s name him Anthony, calls for an ambulance using his cell phone. The others tell Barry to stay still. They say help is on the way. They linger, convincing themselves such actions aim to help the injured man, all the while ignoring the narcissistic desperation also associated with their assurances, for to Barry’s observers, seeing the man suddenly still after his quarrel with physics reopens a hole in their evening calendars, one large enough to transport truckloads of unhappiness and despair. Whether they realize it or not, nobody wants to break away from the action, and observing a team of paramedics as they strap this bloodied man onto hard boards may stave off the crowd’s sad realities for a little longer.

This is what the world has come to.

But the ambulance will not arrive for another five minutes, Anthony reports, his face hangdog as he shoves the phone in his pocket and straps on a mask, and amid new murmurs, the eyes at the bottom of the hill collect when Barry points with a shaky hand. They follow the invisible tether from Barry’s fingertip to where Martha remains frozen on the hilltop. Seeing her is like a revelation! A new plaything presented for their entertainment. For their distraction. The crowd waits for her to come collect her husband, to collapse in sobs, to do anything to shed light on her connection to the battered man. And the crowd can tell that, despite the rapidly dimming sky, she feels their stares, for Martha starts to take her first step down the green grass, only to yank her foot back. She does the same with her other foot. It isn’t until someone in Barry’s throng shouts, “Come on!” that she snaps out of whatever stage fright she was locked into and makes a true first step into the unkempt grass. The audience ogles her every move in a hush. They wait. She inches. It’s like watching a scene from a war movie when, after the dust settles, a lone soldier emerges from the smoke and walks in slow motion toward the camera. Only Martha moves in slow motion on her own—step eight, nine—careful to not lose her balance. In the far distance, an ambulance siren flutters, a bird song to announce aid’s imminent arrival. But the crowd keeps their squinting eyes on the woman and ignores the sound. Nobody looks down to Barry, either. He is almost an afterthought at this point, the seven o’clock program that acted as a lead-in to seven thirty’s new delight. Martha is but a silhouette, and when she reaches the invisible halfway mark, someone at the bottom of the hill says, “What’s taking her so long?” Emergency lights catch in the branches at the edge of the park while Martha crouches to pick up her husband’s sneaker. She holds the gray shoe above her head to show Barry. She waves it back and forth before cradling it like a baby and resuming her trek. In the cool air, the noise from the emergency vehicle swells. The ambulance careens around the corner. The crowd stares. The world spins. And within this tableau, Barry continues to reach toward his wife, his forehead bloody again. He says, in a broken zombie voice, “Let’s see your impulsiveness.” He laughs, though nobody can really hear him, and the red and white lights now ten feet away flicker across his face, the shine of a mirror ball hung above a crowded dancefloor, a relic from another lifetime.