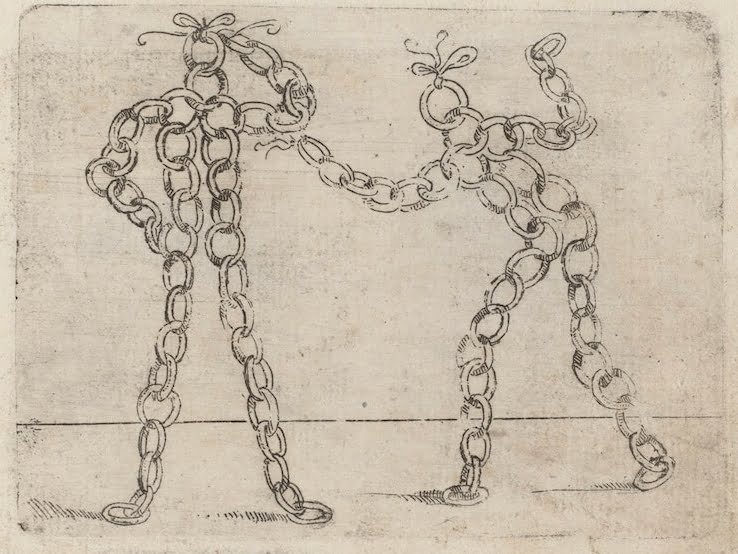 Three generations ago, my ancestors packed Yiddish with their luggage and carried it to the U.S. on boats to escape Europe. My great-grandparents were the last generation in my family whose first language was Yiddish. It was the language of European Jewry for hundreds of years; it supplanted Hebrew as the Jewish language for an entire continent. After arriving in the U.S., it only took one generation for Yiddish to die in my family.

Glitch is a word from Yiddish. Probably. Etymologists haven’t come to a consensus, but most think that glitch is derived from the Yiddish ‘glitsh,’ which translates to mean “slippery place.” The word’s English-language history can only be traced back to the mid-20th century, when astronaut John Glenn gave the word a technical definition in his 1962 book, Into Orbit: “Literally, a glitch is a spike or change in voltage in an electrical circuit which takes place when the circuit suddenly has a new load put on it.” I can’t say for sure what the context was; it’s a surprisingly hard book to find.

John Glenn, the opposite of a Jew, was a religious Presbyterian from rural Ohio. It’s hard to imagine how glitch got to him. Glenn makes it sound like he learned it from aeronautical engineering, like he had to explain the definition every time he used it. Did Jews invent space travel? Or did glitch simply fill in a gap where no English word existed?

Dictionary-dot-com defines glitch as “a defect or malfunction in a machine or plan.” That sounds more like Glenn’s definition than the original Yiddish. The translation changed the word’s identity. Something slippery becomes defective; poetry becomes circuitry. This is assimilation.

I’ve been thinking about glitch because I had a favorite one on my iPhone. My mom and I call each other around 3 times every day, just to check in. My mom likes to say, “I know you’re not doing well when I don’t hear from you.” She’s right. When I don’t pick up her calls, my mom always forgets to hang up until a few seconds after the beep. Always. So every time I miss my mom’s call, I get two alerts: one missed call and one brief, blank voicemail.

This is where the glitch comes in. The missed calls are labeled ‘Eema’ (Hebrew for ‘Mom’), but the voicemails have always been labeled ‘Unknown Caller.’ It doesn’t happen with any of my other contacts, just her.

The glitch started with my first smartphone, an iPhone 3 which I bought in late 2014 just as the new iPhone 6 was coming out. The glitch appeared with the very first missed call from my mom. For the first few months, I was irritated by red notifications which bubbled up over my phone app like a rash. But over the years, it’s become a source of comfort. A reliable, harmless misstep of a technological tool that constantly outsmarts me. It’s the one thing I know which my iPhone doesn’t. I know it’s a message from my mom.

I always thought it would end someday, I just imagined that someday was far enough away that I would have time to prepare. Like, someday-down-the-road I’ll have to buy a car to bring my someday-kids to basketball practice. Someday, I’ll have to think about the quality of schools in my neighborhood. Someday, my mom will be dead, and she won’t call me at all, and I won’t press the volume button to mute my phone or flip it upside down on my desk so that I don’t see the screen light up.

Every time I’ve upgraded my phone, I worried the glitch would correct itself. It never did, until two months ago when I upgraded to the iPhone 11. My newest smartphone finally fixed its bug. Joy, meet death. Just like that, an era slipped through my fingers to disappear forever.

Adding the suffix ‘-ik’ to the end of Yiddish nouns can turn them into adjectives, similar to the German ‘-ig’. ‘Glitshik’ means slippery or elusive. How appropriate.

When I saw the missed call and voicemail from ‘Eema,’ I stared at my phone in disbelief before eventually deleting the message and popping two Tums tablets. I called my mom back to tell her about the voicemail glitch for the first time. Initially, she was confused. She hadn’t realized she’d been leaving me messages.

“Eema, you leave me a message literally every time you call,” I said.

“Do I say anything?” she said.

“No, Eema, every time you call, you leave me a blank, 3-second message,” I said. “I think you just forget to hang up.”

Since we talk every day, most conversations only last a few minutes. Our brief chats feel like temperature checks; we talk for just long enough to make sure the other is okay. I can usually tell from her voice that she’s lying down in bed alongside Balthus, her battleship grey cat.

This conversation was our longest in weeks. I told her that, for the first time ever, I had gotten a voicemail from ‘Eema.’

“I’m kind of reeling to be honest,” I said. “I don’t know why I was so attached to the glitch.”

These days, Yiddish is making something of a comeback. Yiddish web series pepper my YouTube algorithm. Old Yiddish plays are making the rounds both on- and off-Broadway. Duolingo even recently added Yiddish to its offerings.

But ‘new speakers’—an academic term used to describe people who choose to learn and speak a new primary language as a way of reinventing their political, social, and cultural realities—learn their languages with different quirks and norms than those who came before. As with neofalantes speaking Galician or with gaeilgeoirs speaking Irish, new speakers in Yiddish are creating a new dialect of an antique language. That’s because they incorporate knowledge from their first language into their new one. To them, glitsh might simply mean glitch.

My great-grandmother’s name was Sonia, derived from the Greek word for wisdom. She was born in a tiny Ukrainian village in 1907, 14 years before John Glenn was born.

I wonder what she would think of glitch. If I could speak to her now, I’d tell her about the bug on my smartphone. First I’d have to explain smartphones, and digital voicemail. And maybe we’d need a translator. But I know eventually I’d ask if she knew a word for something like that—a slippery place, a technical bug, a malfunction in the machine—in Yiddish. I’d ask her if she thought words meant something solid down through the years, something enduring, or if words might lose their meaning when the world decides to upgrade.