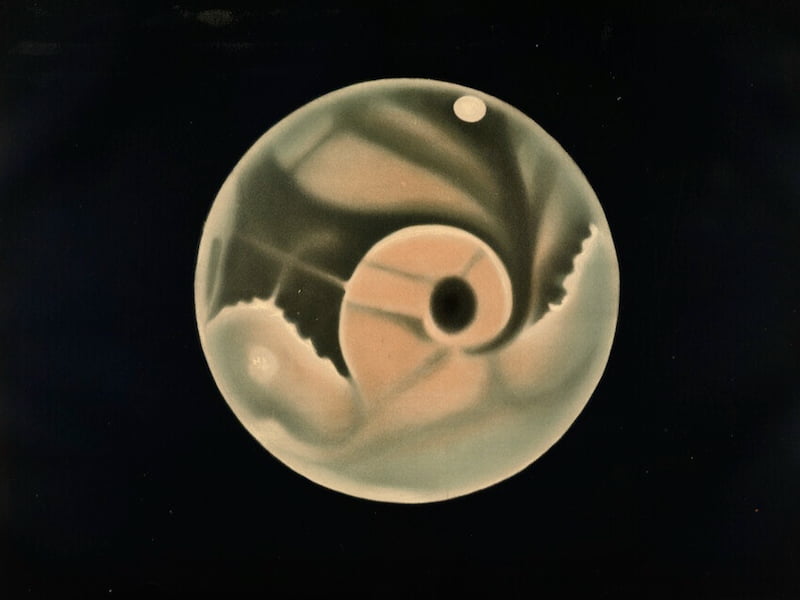 Regarding a Kansas farm, there are documents – maps, photographs, and a handwritten journal, its ink gone brown. If you squint at the 1916 county atlas and plat book, you can make out a farmer’s first and last name inked on a wedge of land tucked under a curve of the Arkansas River. The farmer named this place Jingletown.

Jake farmed, built, and gardened there. He grew and sold wheat, corn, and melons. He called the first structure Jinglehouse, built while he lived at his parents’ farm, worked on after family chores.

In 1907 when Jake was 19, he began a daily work record and continued writing each day until he was 30. By giving Jingletown a name and keeping track of it in his journal, Jake made the place live, filled it with speculation. I envision the garden, barn, one field, a side of the house easily as if I’d been there. Years on, Jingletown became the mythical homeland where my mother was born, the place occupied by one family — Jake and Iva, their five children, dogs and cats, horses, pigs and cows. Because I cannot discover why it was named, I invent a lilac bush hung with silverware and old keys, or a bottle tree in the wind, or the ring of harness over horses’ necks.

I have a photograph of my mother on Jake’s birthday the year he died in a car crash, age 49. She sits behind the new gravestone surrounded by flowers – prairie garden zinnias mostly. She is freckled and round-cheeked, age twelve. Her curled hair brushes the shoulders of her dress. On the bottom margin, her mother noted: Dad’s birthday – August 24, 1938.

Though I swear she had been unconscious of the calendar for weeks, she died in 2001 on the same date. My mother looks at me out of the picture on the day of her death 63 years later. Her gaze brushes Jake’s gravestone and branches from the 1930s photographic paper to me, where it puts down roots.

He was dead years before I was born. I’ve read and reread each journal page and not once does a common address – rural route or road number – appear. On the last pages, though, he made a list of fruit trees he planted, mostly cherry and apple varieties, an apricot, a peach or two. Within a few years, Jake’s orchard dream would dwindle and die from flooding or drought. He plowed it under and planted corn and wheat. He cultivated cantaloupe on the sandy riverbank and trucked loads of them to town, noting in his ledger the pounds and proceeds from each trip. Sometimes he took one of the children along.

As drought and dust storms brought meager crops and the Great Depression weakened grain prices, Jake took his family and left home, trading it for a job and house in town. He sold the land and soon lost his life. Whatever remains of Jingletown fills the creases of the ledger he covered with words, tangled among his penmanship.

Maps, like dreams of flying, bestow power. Split from myself as in dreams, I and someone not-I survey from above, trying to make out the owners of each pastel acre. In 1916, a mapmaker drew the irregular shapes of farms, made approximations based on land surveys, and marked bridges and roads, inked river flow between banks.

Talking to myself, I hover over the beige digital emptiness I find, a whole screenful of nothing except light blue river and white road: Dartmouth Rd intersects SE 10 Rd that ends in a loop like a magnifying glass, one single circle amid the map’s parallels.

June 8, 1918: Hoed till noon. Father and mother came down. Went after alfalfa. Came back and hoed till dark. Finished cantaloupes. Total eclipse of sun this evening about 6 p.m.

She lines them up where the light is. My grandmother’s daughters and sons, or anyone she can gather when she discovers the camera under the mess. What’s a broom or dust rag to a magic box that keeps the faces of those she loves? Her finger steadies on the button, she clicks: freckles and overalls, one kitten, horses, a goat hitched to the little cart, her husband holding out his big hands. She clicks: hollyhocks beside the porch, friends who dropped in, a neighbor wearing a sheet and a cardboard crown. When grandmother’s photos come back from the drugstore in town, she inks names in the margins and always includes the white horse, the dog with his tongue out, the blur in the birdcage atop a Model T.

When she was grown, my mother had a fruit empire – bright cherries on two backyard trees.  The subjects she could rally – her children, her eldest sister – stooped under limbs and climbed ladders wearing bleach bottles with holes cut into them, fastened around our waists with rope. We reached into the tree, pulled and dropped each cherry into the bottle, a cascade of shiny marbles piling up without temptation to taste even one sour fruit.

Once, we went to find Jingletown. Mother, who raised us 30 miles away in town, was seeking sand hill plums, and her sister, still a farmwoman living even farther away, remembered plums had grown around the homestead. The cherry-picking bleach bottles rolled around the trunk of the big Dodge my mother piloted over dirt roads.

Like her taste for jelly and her stubborn insistence we go on this quest, sand hill plums are damn near invincible. They’re native to the sandy prairies of Kansas and love a drought. In spring, they bloom white and in the heat of summer, they put out small red fruit, each round plum frosted with a white film. Thickets are thorny, and stems are covered with small leaves that turn down at the tip. Despite my willingness to help, I couldn’t spot plum brush from the back seat. The homestead was a setting for family stories, not a place I knew how to recognize.

The sisters did not know the way to their birthplace, but they kept trying – false turnings into other drives, backing and retracing, craning to see anything familiar at intersections. Neither of them had been home in more than thirty years.

On both sides, I come from families that use names to claim, to tease, to connect. My father invented nicknames for his wife, his children, and most of his many siblings. I was Glims. My sister was Russki, my brother Rocky. Mom was Jackson. His flamboyant elder sister was Paganucci. My father had his original reasons, but they seem less important than his inventive daily act of twirling out an aspect of who we were. On jovial days, I was Glim-ronia – a riff on Louis Jordan’s 1945 jump blues hit “Caldonia,” a dance song from a decade before I was born. My dad would holler with glee, “Glim-ronia! Glim-ronia! What make your big head so hard?” My mother might interject, “She got it from you.”

Place names, though. They should stick. Poets can rename a river because of light or weather or mood, but if you want to navigate, you need permanence to count on. Naming invents the landscape, marks off a vista or makes a dream visible, pulls the past into the present, privileges a worldview. The same year my dad was listening to “Caldonia” on a thick 78-rpm disk, English professor George R. Stewart published Names on the Land. Stewart was interested in the human motivation behind how we distinguished places as we settled. He expounds, “Thus the names lay thickly over the land, and the Americans spoke of them, great and little, easily and carelessly … not thinking how they came to be. Yet, the names had grown out of the life, and the lifeblood, of all those who had gone before.”

My grandmother, annotating her husband’s journal after his death, clicked her blue ballpoint and wrote in the margin at the top of April 1910: “Jingletown was the name given the little farm when Daddy squatted on it. Was lots of brush and shrubs there.” Instead of clarifying, this note only deepens the mystery – her passive voice ignores the namer though she must have known who it was. And I’m still no closer to what jingled.

Here is a minor chapter for the myth of place: my son and I walked an abandoned railroad right-of-way one recent spring, a wild and unmarked rural Kansas trail where we found no human traces amid the sharp rocks used to steady rails, pulled up long ago. Wild roses and tall tufted grasses grew around the signposts bearing arcane symbols meant for train engineers. Most were hacked off and strewn in the grass where my son spied our only souvenir – a silver jingle bell sparkling among the weeds, big as a sweet cherry with its metal pit rolling free.

Kansas seasons – planting and growth, harvest and freeze – shaped me and won’t let me abandon their shifting chaos of light and leaves and clouds. How April might blizzard, and August might rain and rain. The coming on of change – I am addicted to it in my cells. The easy reasons are sky and horizon, the near-impossibility of getting too far from the soil. In Kansas, wind carries the news: rain, pollen, ash. Seasons speak clearer than the ephemeral ways we trace comings and goings. For instance, every blustery winter – Decembers with or without dry prairie snow, flat gray Januarys of my childhood, or the hovering climate-change winters post-millennium – I am aware the year ends and begins in darkness like a fleeting life that emerges from the womb only to fall to earth, to fall under it.

Why do I come back or stay when the ground is hard with labor and strain?

February 15, 1911: Oiled set of harness in a.m. Painted house and porch in afternoon. Quite cool in a.m. Pleasant in p.m. Cloudy in eve.

February 18, 1911: Rained all night, turned to snow about 2 a.m. Ground was white by daylight. Snowed all day. Drifting bad all afternoon. Down to Jingletown to feed calves.

Using the century-old plat book map as guide, I trace the closest town and enter its name into Google maps. I use my fingers to move around the countryside until I recognize a particular river curve. Click, and a brown and green pattern replaces the map’s emptiness near where I find what I’m seeking. You will see a green, anvil-shaped patch edged by a swath of trees crowded against the river. And in its upper left corner, you will find a circle of road that loops and catches a small patch of land overgrown and littered with what might be buildings. Zoom in on a house with its roof fallen in, another building losing its siding, fence shadow. You have arrived at Jingletown – the same road in and out, and no way of getting to the river unless you walk across the field. It is hardly spring and the plums aren’t leafed yet, the trees barely budding. You float, bird perspective, feel ancestors breathe from the ground. You think you catch a glimpse of them under your eyes roving over field, road, river. You wish for a way to see the past as overlay, x-ray – bones and skin of how you got here. You click out, then farther, wait for the focus, click broad and broader, until you drift bewildered in satellite omniscience, perceive from space how distant you are from home.