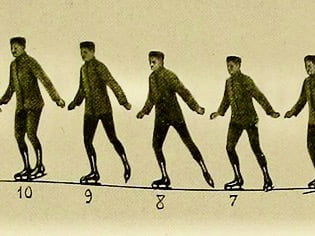 On the train to the movie theater, Marin counts five hours ahead. London is asleep by now. Ethan is there, studying photography. They met in Catholic high school before he could drive. She refreshes her email to see his name. Ethan used to drive Marin to pool parties and diners, anyway. He says he’ll wait up for her call. The blue of the email digs into her and strikes a match. He signs it, Yours. The flame is a fire. His allegiance, across both ocean and time zone, warms her. She’s four stops away.

The night is early March, cold. Marin rolls the spine of a pale pink paperback. The subway plows heartlessly under the East River. She is going out on a movie date with a man she matched with on a dating app four days earlier. Marin digs through her leather work tote to find her phone to recall his name.

His name is Vince. He has already parked his car tight against the curb, around the corner from the theater. He has purchased the tickets, slipped them into his zip-up jacket pocket. Vince is wandering through the aisles of Rite Aid across the street. He’s reading greeting cards for teenagers. His fingertips leave sweat marks on the cardstock. He moves to the medical accessory aisle. He’s killing time.

Marin covers her face with the book as the train lifts above ground. She used to find the view of Manhattan romantic. Now she has bags under her eyes. She’s twenty-four and works fifty-three hours a week for a job in PR that pays forty-one thousand a year. Her life is a series of numbers. She isn’t happy. She’s two stops away. But at least she never stops moving.

The dating app’s interface looked hopeful to Vince. Hello beautiful, he would type, in earnest, meaning every syllable of the word. Men matched with Marin just to give her unwarranted book recommendations. She would type out her phone number as an immediate response, a challenge, a way of taking the pressure of compatibility off her plate. Marin swiped yes to Vince because he looked helpless. Vince swiped yes to Marin because she looked like she could change his life. He texted her immediately.

His offer earlier in the day to meet on the subway platform struck her as eager. The punctuation he forwent in texting felt like forced ease. He remains a series of numbers in her phone, a name suggested, but ignored. What matters is that Marin isn’t home. She’s one stop away. She is away from her bed and her phone and a series of digits she never saves because typing them out feels like a poem, the two dial tones, a sigh, his voice saying, I knew you’d call.

Ethan never says Hello or How are you or It’s good to hear your voice. He owns her from the moment he answers. It’s always dark in New York when she calls, but sometimes morning in London. He tugs his black out curtains, leaving a hole to ash his cigarette and ignores the light. For hours they explore their allegiance. Marin takes great pride in their gaping silences. Ethan flicks his zippo lighter open and closed. She remembers the way their elbows touched at high school football games. The field was a lake of green. Their classmates were white noise. His eyes were two, round theologies. He pulls up tabs on his laptop: plane tickets, large country homes with creaky floors, Yoko Ono and John Lennon in bed.

Marin dates the occasional man because she is in love with this seventeen-year-old three time zones away. She places men, like Vince or Henry or Brian or Chris, like screens directly in front of her desire. To her, it feels grown up to pretend to want something she doesn’t. The best part is the moment she walks into the bar. She keeps her profiles modest. Exceeding expectations turns her on. Ethan studied what made people like Marin so keen on pretending. Yesterday he presented his research at four o’clock in the morning, London time.

You don’t like any of them because you’re a sociopath, Ethan said.

When they discuss the other men on the phone, Ethan pretends it bothers him. Really, it’s nice to think of all the others who have to suffer under Marin’s aloofness. He feels he predates them. And anyway, he’s the one she calls at the end of the night.

Whether or not it matters, Vince is standing on the far end of the subway platform. He has walked the length of the tunnel a couple times. When his girlfriend since forever broke up with him two years ago, she said, You never do anything fun. The comment sank into him, arising on Sunday afternoons or Thursday nights. Using a dating app for the first time, pretty fun. Seeing a movie on a first date, he thinks to himself, very fun.

Marin’s train hauls into the station. She exits the car and turns. There is a short man nearly running toward her, a hand raised, breathing loudly. She feels something ballpark to regret, but it’s tamer than that. It’s sympathy. Vince stops in front of an overflowing trash can. They look at each other, animal to animal. What Vince sees is exactly, no, better, than he imagined. The two of them exchange a kiss on the cheek. They walk into the night.

Marin remembers the incident differently. She remembers the way Vince’s hands were shaking when they were wrapped gently around her back. She recalls the sweat, despite the frigid temperatures, that fell in sheets from his uneven hairline. It was then she decided there was nothing else worth remembering, only hours worth enduring.

Vince beholds her. He basks in her cool demeanor, feels the chill of her absence and calls it sophistication. Marin’s eyes are charged. Her shoulders, under her wool coat, are sharp as if they were carved from something. The way her neck moves catches his eye like a flash. He will remember all of this, he resolves, in case it becomes important.

The night fills in the space between the sidewalk cracks. Marin fishes out a pack and turns to him.

Do you mind if I smoke?

Vince smiles, lifting his face toward hers. If I can have a drag, he says.

Marin looks at him with pity. Her eyes are grey and watery, everything she looks at, she looks down on. She lights a cigarette for him and places it in his mouth.

They walk on the dividing line of the day. Men reach to pull metal grates to the sidewalk. Co-workers wave and march back to their second lives. Bartenders swirl napkins inside bloated wine glasses. Lights dim. A kiss on the cheek, two, maybe just a handshake and a laugh. The commerce of connection is booming. It’s Tuesday night.

What do you do for work? she ventures.

He turns up to her, Ferrying, I work for a ferry control company in Jersey.

But you live in Brooklyn, she clarifies.

I love it here, he says.

But, like, how long is your commute? she asks.

Depends, he starts, but then Marin loses interest.

It all feels familiar, the commute conversation, the what train did you take to get here conversation. Next he’ll ask if she has roommates, how long she’s been in the city. No and six years, but it’s just more numbers. With Ethan, there are no numbers, only lines, shapes, spaces in between lines and shapes.

She can see the glow of the theater on the end of the block. Vince swallows. He swallows because the smoke from the untouched cigarette he’s holding feels toxic. He doesn’t smoke. He drives to Staten Island for Sunday dinner. He dates the same girl for four years and starts looking for rings the week she tells him he’s not adventurous. A jolt of inspiration. He turns to Marin.

What do you say we skip the movie and just go get dinner? he says.

Marin declines swiftly, I’d rather just stick to the plan.

They continue walking. The theater arrives like an exhale. He fishes the tickets out of his jacket pocket. Marin opens the door and holds it to Vince. He is seized with fear. Humiliated. And somehow entranced. The smell of butter and cardboard and dust rushes toward them.

He’s protective of the theater’s acquired patina. He calls it charm. A voice in his head interrupts with, Buy the popcorn. It was a tagline from a dating coach he watched one night on Youtube when he couldn’t sleep. It signals commitment. It means when you enter a movie theater on a date, show your partner that you’re keen for the whole experience.

But Marin isn’t like that. She’s cool, for Christsake. They walk past the concession stand. Vince blocks the blinking menu sign with his torso and gestures toward the dark theater. Marin sighs. She thought of the popcorn all day. She skipped lunch in hopes of a few handfuls. She thinks about Ethan, about how he would buy her one of every candy. She doesn’t eat candy but he would max out his credit card and hand them out to every person in the theater before collapsing into a seat next to her. He was the kind of person who understood the importance of metaphors.

It hits both of them as they waddle down the main aisle of the theater how sober they are.

We should have stopped for beers, Vince says to Marin but mostly to himself.

She ignores him and leads them into a third-row pair of seats far off to the left. Vince sees this choice as a part of her personality—artistic, he’ll even venture, quirky. They land in the worn redness of their seats. The theater fills up slowly, people drip into the rows. Marin takes out her book and immediately begins to read.

Vince laces his fingers together and asks where she’s from. She looks up, says, New York, and drops her eyes back to her book. No question back.

Marin imagines Ethan lifting the arm rest between them and sliding his hand up her thigh. So early, she thinks, before the coming attraction and the film’s climax, he touches her. His need for her predates everything. She crosses her legs and imagines the bar they would stop by after, for two drinks. Then a cab home. She will describe Vince to Ethan as a “soft man.” She will exaggerate his efforts to comedic size. Ethan will shutter at the way she finds fault in any man in love with her. It will make him concerned. It will make him need her more.

The lights soften slowly. Vince decides he will kiss Marin outside the theater before she has a chance to shit on the movie or hail a cab. He feels like a resolved man, a certain kind of drug.

An orange, retro graphic fills the screen, asking patrons to turn off their cellphones. Marin’s is buried under overdue line sheets and cloudy plastic bags of nuts. Ethan is emailing her about a gallery he visited today. He’d seen an advertisement for it online and recognized the painter as someone she’d mentioned. That was enough. That sidebar blinking was as close to leaving his flat and basking in the glory of the art as he would get. He lied and said it was chilly, that he thought of Marin the entire tube route—no music, no book, no singular thought outside of her being.

Marin slides her bag beneath the seat in front of her, as if for takeoff. Vince peers over at her, his face forward, but his eyes and their whiteness straining. The letters projected on the screen are miniature in his pupils. Marin wouldn’t know. Marin is facing forward, holding her breath as the wave of darkness lifts from the carpet and the light fades.